you are here: Home » Invitation to the UR Roadshow in Linz with Key-Talk by Mr. DI Freiseisen on the topic of AI

Invitation to the UR Roadshow in Linz with Key-Talk by Mr. DI Freiseisen on the topic of AI

"The future belonged to the alliance of man and machine.
- AI from hype to reality"

There are probably few topics at present that are perceived as contradictory and confusing as artificial intelligence (AI). Companies with large marketing budgets promise to use AI to cure cancer, to produce intelligence, to solve traffic problems, in short, to solve (almost) all of mankind's problems with the cognitive methods of AI. Kassandren predict the end of mankind or at least an extremely high unemployment. Some, like the famous physicist Stephen Hawking, are not quite sure: "AI is either the best or the most dangerous thing that can happen to humanity.

However, there is agreement that AI will remain a dominant topic in the coming years and will make a significant contribution to the economic growth of the industrialized European world as a technology.
AI is making great progress, but it is not infallible. A new teamplay between man and machine is therefore becoming increasingly important.

Key Talk on the topic of AI
from Mr. DI Freiseisen
at the voestalpine Stahlwelt in Linz
on 2 July 2019 at 10:30am

The aim of this lecture is to give non-technicians a well-founded overview and thus to create a solid basis for discussion about possible areas of application in their own environment.

DI Wolfgang Freiseisen studied Technical Mathematics at the Institute for Symbolic Computing (RISC) under Prof. Bruno Buchberger. Since 2001 he has been managing director of RISC Software GmbH, which is one of the most important non-university research institutions in Austria, with the majority owner Johannes Kepler University (JKU). Thus he is always very close to the research. DI Freiseisen has been a lecturer for mathematical optimization at the University of Applied Sciences Upper Austria since 2008 and has been a member of the advisory board of the IT Cluster Upper Austria since 2012. In Alpbach 2017 he organized the Break-Out Session of the Province of Upper Austria on "2nd Machine Age - Learning Machines and Autonomous Machines" and organized the development of the AI strategy of the Province of Upper Austria.

In addition to the Key-Talk you can expect further exciting lectures by Universal Robots, Schunk, Sick, Cognex, Senopart, Pia, Zimmer and SKF as well as a continuous exhibition of applications with UR Cobots and UR+ products. 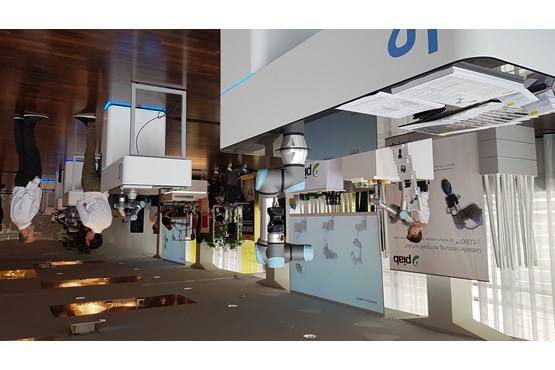